DO YOU KNOW ANYONE WITH HANSEN’S DISEASE? I don’t either.

Hansen’s disease — also known as leprosy — is one of the world’s oldest maladies. Leprosy is a bacterial disease that attacks the nervous system, particularly the nerves of the hands, feet and face. As the body absorbs cartilage into its system, victims of the disease slowly lose their fingers, toes and even limbs. While leprosy has been eradicated in the west, it is still active and greatly feared across Asia because of the disfigurement it can cause, the social stigma it carries, and because it can be transmitted through close contact with a patient.

There are tens of thousands of people suffering from leprosy in more than 1,000 leper colonies throughout South Asia. The social stigma is devastating, perhaps even worse than the disease itself. However, leprosy can be totally cured without permanent damage if medical help is sought immediately. Unfortunately, in remote places and among the poor, diagnosis and treatment often come too late. And sadly, only those among the cured who have no visible deformity will be able to integrate back into society. All others will have to live in leper colonies — alone or with their families — for the rest of their lives.

In the midst of this hopelessness, the light of Jesus Christ is breaking through, bringing hope to those who have been brushed aside by society. Please pray for Gospel for Asia’s leprosy ministry, that many suffering from this terrible disease would embrace the Savior, who is reaching out to them in love. GFA-supported missionaries in the leper colonies show Christ’s love by cleaning wounds and changing bandages, by giving medical care, by making special shoes to protect the people’s feet, by helping with household chores, by providing food, but most importantly by telling the people of and showing Christ’s love for them.

Recently a group of students traveled to Asia and visited a leprosy colony. Click the photo below to watch and share Ashley’s powerful story (but HD seems to short it out).

Thank you for sharing the plight of these unseen, yet precious people!

Empower Women with the Ability to Read 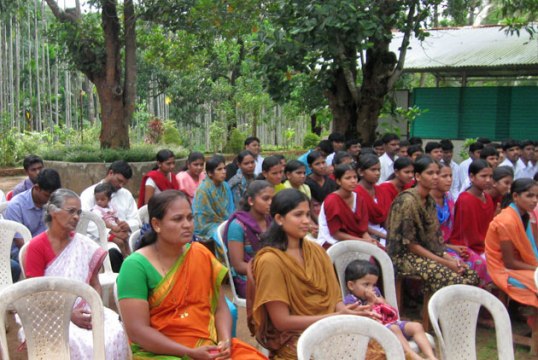 Millions of South Asian women are illiterate. More than half the women in Bangladesh cannot read at all. In India alone, there are an estimated 242 million women who are unable to read—that’s about half the adult women in the country.

Teaching women to read and write opens doors of opportunity and gives them the joy of being able to study God’s Word for themselves. These women are eager to learn; they just need a teacher and a few simple materials.

By Learning to Read – They Stand Firm

But now, through Gospel for Asia’s Women’s Literacy Program, the written world is opening up for the first time. Women learn by reading the Bible, which is the foundational text for the classes, so they gain a knowledge of Scripture even before they’ve completed the course.

Pastors’ wives and women missionaries serve as teachers, so students have the opportunity to grow spiritually under their mentors. The ability to read and understand for themselves also gives these women the confidence to refuse unfair contracts, whether they’re from loan officers or abusive employers.

Many women in GFA-supported churches struggle because they cannot read God’s Word. Help them know the Lord more by giving to Gospel for Asia’s Women’s Literacy Program.

More than one in three women in Asia are illiterate—and the statistic holds true for women in Gospel for Asia-supported churches. Their inability to read leaves them vulnerable to those wanting to take advantage of their ignorance, and without reading the Bible, it’s a challenge to deepen their knowledge of their Savior.

YOU Can Make a Difference!

With your help, women in Asia can learn to read and will be equipped to tackle life’s hurdles. Click on the link below to find out how you can change someone’s life forever.

More than 250 million women in Asia are illiterate

YOU DID WHAT IN MY NAME?

You did what in my name?

“Not everyone who says to me, ‘Lord, Lord,’ will enter the kingdom of heaven, but only he who does the will of my Father who is in heaven. Many will say to me on that day, ‘Lord, Lord, did we not prophesy in your name, and in your name drive out demons and perform many miracles?’ Then I will tell them plainly, ‘I never knew you. Away from me, you evildoers!'” Matt. 7:21-23

BUT LORD, OUR WORSHIP SERVICES ARE AWESOME!
North Central University (a Pentecostal university in Minneapolis, Minn.) Chapel Spokesperson, Betsy Tolingsworth explains, “The church is locked into a bloody battle with MTV, VH1, Nickelodeon, and Star Wars, for the hearts and minds of the young people of this country. We need to prove our worship services are a mind-bending, edge of your seat thriller experience just like any other entertainment venue. Plus, we spent so much money on this stuff, we’re kind of stuck using it now.”


BUT LORD, WE BUILT THE BIGGEST CHURCH IN THE U.S.A.!

BUT LORD, I SPOKE WITH TONGUES AND DANCED IN THE SPIRIT!


BUT LORD, I HEALED THE SICK!

BUT LORD, I RAISED THE DEAD! 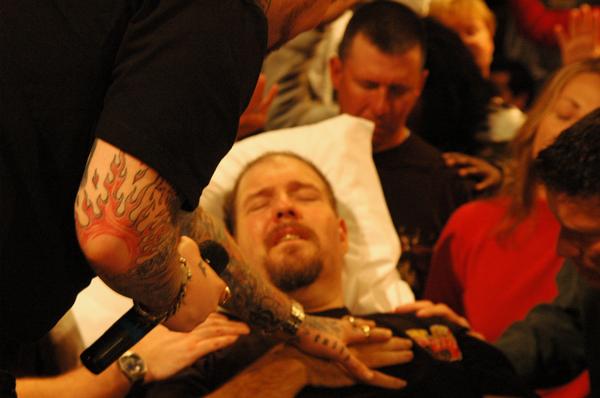 BUT LORD, I PREACHED TO MILLIONS!

BUT LORD, I CAST OUT DEMONS! 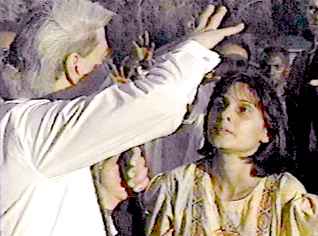 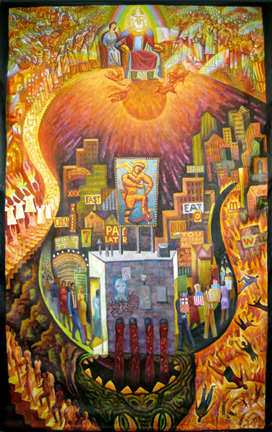 So what am I saying here? Shouldn’t Christians pray for the sick, build churches, preach and cast out demons?

The “goats” are those who have acted in a self-serving manner, thinking primarily of themselves and what they’ve accomplished. Notice they say, “Lord, Lord, did we not prophesy in your name, and in your name drive out demons and perform many miracles?” They boasted about their works. But what was Jesus’ answer?

Unbelievably, he said “I never knew you”! They were arrogant and proud, the very sin of Lucifer. It appears that the goats are those who want to “make a name for themselves.” Now where else do we see that?

In Genesis 11:4 it says, “Then they said, ‘Come, let us build ourselves a city, with a tower that reaches to the heavens, so that we may make a name for ourselves and not be scattered over the face of the whole earth.'”

God didn’t scatter the people who were building the Tower of Babel because He was afraid they’d reach the heavens, even though that’s what most Christians believe. That’s ridiculous! What would God Almighty need to be afraid of?

No, God punished them because of their pride and arrogance.

On the other hand, Jesus pointed out that those who fed the hungry, gave drink to the thirsty, clothed the naked, invited in the stranger, and visited the sick and imprisoned would spend eternity with Him.

And He knew them, because they acted like He did. They operated in the same Spirit as Jesus, and didn’t even realize it! It was natural. “When did we do those things?” they said. Their true salvation is in the fact that they never thought twice about doing the things Jesus did, because He lived in them. His Spirit – the Holy Spirit (see the Fruit of the Spirit in Gal. 5) – dwelt in them. It was obvious to the King that these “sheep” had truly accepted Jesus into their hearts, because He witnessed the outpouring of His love into the lives of others.

THIS IS NOT A SOCIAL GOSPEL, NOR IS IT SALVATION BY WORKS.

No, we must accept the atonement Jesus provided for us on Calvary to enter eternal life, but if we don’t have works to prove our faith, then we don’t have faith. It’s as simple as that.

And for all those who are arrogant and want to make a name for themselves, there is hell to pay. Literally.

I will say here that in the last 35 years I have witnessed more pastors and church leaders who are full of themselves than I care to mention. They may do “good works,” but it’s usually with the intention of taking credit, gaining power, making money, increasing the size of their churches, and gathering the adulation of men to themselves. I’ve seen it over and over and over again. And recently, I learned of another pastor caught up in a five-year-long adulterous affair, who has not and will not 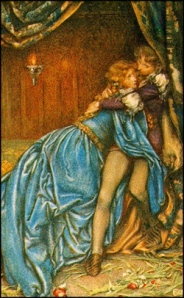 be corrected properly because he has no real accountability to anybody. This is the height of arrogance and pride. It scares me to think of the consequences, especially because I love this man.

I realize I’m not without fault, but I also have not set myself up as a ruler or teacher over others, then lorded over people in such a manner as to “make a name for myself.” “Not many of you should presume to be teachers, my brothers, because you know that we who teach will be judged more strictly.” James 3:1

It’s safe to say that Jesus doesn’t truly “know” people like this, even though they have titles, degrees, gifts, callings, mega churches or great ministries. Pride and arrogance suck salvation right out of men’s souls, leaving them “whited sepulchres, full of dead men’s bones,” just like the Pharisees of Jesus’ day.


He hated what they represented then, and it’s no different today.

We must stay humble if we expect to follow Jesus. It’s the only way.


“Or do you think Scripture says without reason that the spirit he caused to live in us envies intensely? But he gives us more grace. That is why Scripture says: ‘God opposes the proud but gives grace to the humble.’ Submit yourselves, then, to God. Resist the devil, and he will flee from you. Come near to God and he will come near to you. Wash your hands, you sinners, and purify your hearts, you double-minded. Grieve, mourn and wail. Change your laughter to mourning and your joy to gloom. Humble yourselves before the Lord, and he will lift you up.” James 4:5-10

WHAT DO WE DO WITH THE HURT & ANGRY ONES?

Is it possible that brothers and sisters are hurt and angry because Christians have offended them in some way – judged them, mistreated them, scorned them because of the way they look or because of their politics? Or because they challenged the authority that abused its position?

Oh yes – I’ve seen it, experienced it, and have witnessed the wreckage that we Christians can produce on those who don’t fit our Christian mold. Shame on us, and shame on anyone who can’t see this or won’t admit it.

Our “formulaic” belief system is not what God designed for us to pass along to the world. We’ve got to really love people, like Jesus did, and apply salve – not salt – to people’s wounds.

Have you offended anyone, or caused them to question their faith in God or in Christianity?

Who’s right here? Who is the greatest?

The Greatest in the Kingdom of Heaven

1At that time the disciples came to Jesus and asked, “Who is the greatest in the kingdom of heaven?”

5“And whoever welcomes a little child like this in my name welcomes me. 6But if anyone causes one of these little ones who believe in me to sin, it would be better for him to have a large millstone hung around his neck and to be drowned in the depths of the sea.

The Parable of the Lost Sheep

10“See that you do not look down on one of these little ones. For I tell you that their angels in heaven always see the face of my Father in heaven.[a]

12“What do you think? If a man owns a hundred sheep, and one of them wanders away, will he not leave the ninety-nine on the hills and go to look for the one that wandered off? 13And if he finds it, I tell you the truth, he is happier about that one sheep than about the ninety-nine that did not wander off. 14In the same way your Father in heaven is not willing that any of these little ones should be lost.

So what do we do now?