This week, we in the U.S. celebrate Thanksgiving. Hours later, or now in some cases hours before, the Christmas buying season begins.

Has the celebration of Christmas gotten out of hand? Are parties, presents and decorations obscuring the true meaning of the season? Forgotten Christmas is the story of a young girl who knows something is amiss. And she has an idea that just might help others remember what Christmas is really about. Watch Forgotten Christmas today and share it with your friends and family.

While we in the West spend, spend, spend there are hundreds of millions of people whose reality is very different.

Spread across South Asia is a group of forgotten people too numerous to count. Despised by their countrymen and viewed as subhuman, even the shadows they cast are believed to be cursed because of their perceived filth. They are the Dalits and backward caste people of South Asia, the lowest of the low.

Estimated at over 300 million in number, you would think they have great political might. Unfortunately, this is not the case. Divided into many smaller groups that speak numerous languages, they find organization almost impossible. 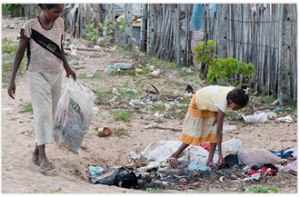 One young woman named Tarala had endured this discrimination her whole life. Her family was so low in the caste system that occupations were chosen for them. The false gods she worshiped gave her a horrific responsibility.

Her False Gods Demanded She Beg Three Days A Week

Tarala’s religion determined that she and her family would be beggars. Every Tuesday, Thursday and Saturday, whether rain or shine, they begged for their livelihood. There was no discussion, no pleading their case to a higher authority. This was their lot and there were no other options.

Asking for money three days a week barely fed Tarala’s family. When her parents became seriously ill, Tarala knew that, as the oldest daughter, she must do something. Money had run out. Despair was growing. Starvation was coming.

With nowhere else to turn, Tarala found a job in a factory. She worked on the days she wasn’t assigned to beg, but her co-workers didn’t approve of her presence because of her low caste. They harassed and humiliated Tarala, constantly reminding her of her place in the world. The abuse grew so intense, she had to leave the job and lose the income it provided.

Then a miracle happened. A pastor in the area met Tarala, and she shared with him all her troubles. He offered to enroll her in a sewing class, and she learned the trade quickly. There was just one problem: Tarala couldn’t afford a sewing machine. 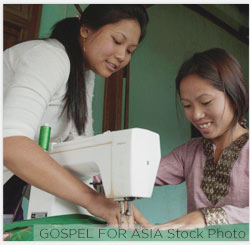 That’s when a person donated a sewing machine through the Forgotten Christmas gift program. Upon receiving the gift, Tarala was amazed that someone cared enough about her to provide her with a means for a livelihood.

Tarala opened a dress shop, and business boomed! From the income she earned, she was able to purchase a second sewing machine and teach her younger sister to help. Now Tarala can work from home and take care of her sick parents.

Tarala is now teaching others in her village how to sew. One small gift has literally changed the lives of an entire village. But best of all, she is learning about Christ and his amazing grace.

Your Gifts Make an Impact

Help others like Tarala, low-caste people who are sometimes forced to find employment removing carcasses from the street, or cleaning human waste out of the sewers.

On average, the western consumer spends over $500 on Christmas. This year, consider setting aside 10, 20, or even 50 percent of your Christmas budget to reach a lost and dying world.

Today, you can make a difference. Share Christ with them this Christmas. You may be the only person who ever does.

May the Lord bless you with eyes to see and ears to hear.

REPAIR THE CHURCH, WHICH IS IN RUINS

St. Francis, Pray for Us


Today (Oct. 4) Christians around the world celebrate the life of St. Francis of Assisi, one of the bright lights of the church and one of the most venerated religious figures in history.

The life and witness of Francis is as relevant to the world we live in today as it was 900 years ago. He was one of the first critics of capitalism, one of the earliest Christian environmentalists, a sassy reformer of the church, and one of the classic conscientious objectors to war.

Francis was the son of a wealthy cloth merchant, born into a society where the gap between rich and the poor was increasingly unacceptable. It was an age of religious crusades, where Christians and Muslims were killing each other in the name of God. Sound familiar?

Francis did something simple and wonderful. He read the gospel where Jesus says, “Sell your possessions and give the money to the poor,” “consider the lilies and the sparrows and do not worry about tomorrow,” “Love your enemies” — and he decided to live as if Jesus meant the stuff he said.

Francis turned his back on the materialism and militarism of his world, and said yes to Jesus.

One of the quotes attributed to Francis is a simple and poignant critique of our world, just as it was to his: “The more stuff we have the more clubs we need to protect it.” It does make you wonder if he’d be on Wall Street protesting today.

With a childlike innocence, Francis literally stripped off his clothing and walked out of Assisi butt-naked to live like the lilies and the sparrows (and to become the patron saint for the flower children). He lived close to the earth, and like Jesus became a friend of the birds and creatures, whom he fondly called “brother” and “sister.” In light of that, many Christians brought their pets to church yesterday for a special all-pets-allowed service, an annual tribute to Francis. And many a bird-bath dons his iconic image.

But it’s easy to turn our best movements into monuments. His life was a powerful critique of the demons of his day, which are very similar to the demons of ours.

One of my favorite stories of Francis was when he decided to meet with the Muslim sultan during the Fifth Crusade. It was a tumultuous time. War had become a necessity and a habit, and was baptized by much of the church. Francis was sent off as a soldier, but he could not reconcile the violence of war with the grace of Christ. So he got off his warhorse, and put down the sword.

Francis pleaded with the military commander, Cardinal Pelagius, to end the fighting. Pelagius refused. Instead, Pelagius broke off all diplomatic relations with the sultan of Egypt, Malik al-Kamil. The sultan in turn decreed that anyone who brought him the head of a Christian would be rewarded with a Byzantine gold piece.

Francis, however, pursued his vision in steadfast faith, surmounting all dangers in a journey to see the sultan. He traveled through fierce fighting in Syria and inevitably was met by soldiers of the sultan’s army, who beat him savagely and put him in chains, dragging him before the sultan himself. Francis spoke to the sultan of God’s love and grace. The sultan listened intensely and was so moved that he offered Francis gifts and money. Our saint of course had no desire for the money, but he gladly accepted one gift — an ivory horn used in the Muslim call to prayer. He took it back with him and used it to summon his own community for prayer. Both Francis and the sultan were transformed by that encounter.

In an age of religious extremists, Francis offers us an alternative. We have seen religious extremists of all stripes — Jewish, Muslim, Christian — distort the best that our faiths have to offer and hijack the headlines with stories of hatred.  We’ve seen Christian extremists burn the Quran, blow up abortion clinics, bless bombs, baptize Wall Street, and hold signs that say “God hates fags.” But Francis invites us to become extremists for grace, extremists for love.

Although the Church is prone to forget his witness or to make a monument of his movement, there is a whole world remembering his radical witness today. We celebrate his critique of an economy that left masses of people in poverty so that a handful of people can live as they wish. We rejoice in his love for the earth as we work to end the ravaging of our world. We remember his witness that there is a better way to bring peace than with a sword. And we remember the whisper he heard from God, “Repair the church, which is in ruins.”

These are the words of the famous prayer of Francis. May they inspire us to become better people and to build a better world:

Shane Claiborne is a Red Letter Christian and a founding partner of The Simple Way community, a radical faith community that lives among and serves the homeless in the Kensington neighborhood of Philadelphia. He is the co-author, with Chris Haw, of Jesus for President.